Billie Eilish and Hans Zimmer take on James Bond! Those were the headlines for weeks in early 2020 as production on No Time to Die, the 25th 007 film, was winding down. A year later, Eilish and her brother, co-writer Finneas O’Connell, won the Grammy for her title song even though the film had not yet been released. When we finally saw No Time to Die in October, we discovered that Zimmer had incorporated “We Have All the Time in the World” as part of the dramatic score, and I wrote a Variety story explaining the references to John Barry’s On Her Majesty’s Secret Service score (including that song). In December I had the pleasure of interviewing Billie & Finneas about their title song, and in January it was a special honor to interview the entire Bond team — producer Barbara Broccoli, director Cary Fukunaga, composer Zimmer, songwriters Billie & Finneas, and associate producer Greg Wilson — for a 40-minute Zoom conversation on music in No Time to Die. And of course Billie & Finneas won the Oscar in March. 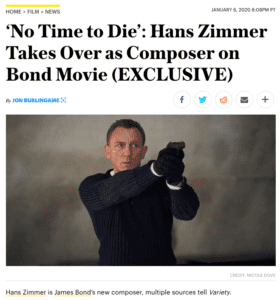