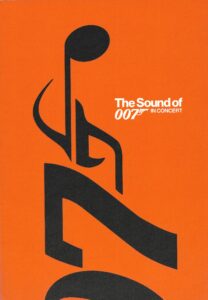 One of the great thrills of this year was being asked to pen the notes for The Sound of 007 In Concert program, an all-star event held Oct. 4 at London’s Royal Albert Hall. David Arnold, composer of five James Bond film scores including Tomorrow Never Dies and Casino Royale, produced the evening (which later became a TV special on Prime Video). My “History of 007 Music” essay appeared over four pages in the middle of this lavish, 44-page brochure. This, I suspect, was an outgrowth of my participation in the Sound of 007 documentary, which aired that same week.