On April 5, Netflix unveiled the eight-part Our Planet, the new documentary narrated by the legendary David Attenborough, producer of so many great BBC films about the natural world. This one is conservation-oriented, examining various aspects of the environment (jungles, deserts, the ice caps, forests, the oceans, etc.) with an eye toward what must be done to preserve them. Steven Price (an Oscar winner for Gravity) composed the music, and on April 16 I got to interview him after a Society of Composers & Lyricists screening (in Netflix’s fabulous new Hollywood screening room) of the first episode. He talked about the process, about recording with the London Philharmonia, and collaborating with Ellie Goulding on a song for the project. 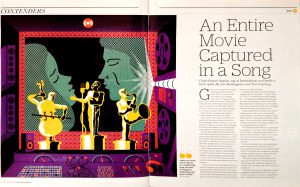 It was a whirlwind four days, beginning with the first-ever Oscar concert at Royce Hall, then a really fun Oscar music reception (sponsored by the Society of Composers & Lyricists) and finally the Academy Awards themselves on Sunday. A roundup, with lots of colorful photos, is here.

One of the most fascinating rising-composer stories of the past couple of years: music editor-turned-composer Steven Price, who would wind up winning the Academy Award for his score for Gravity.